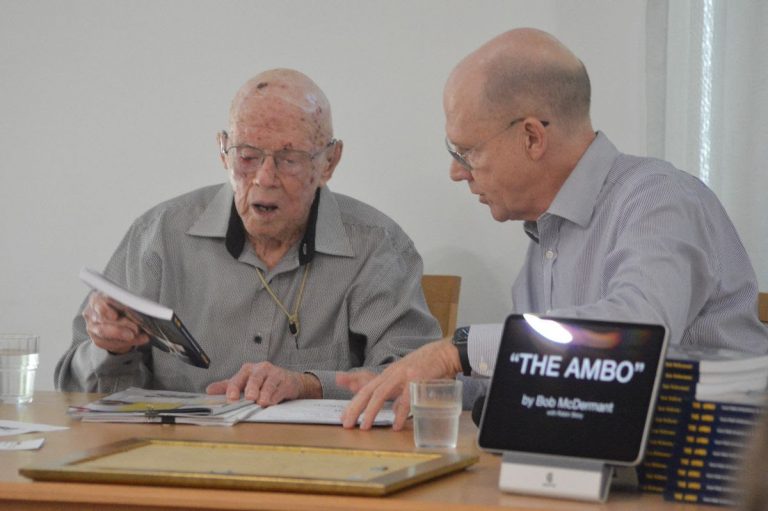 At age 96, Mr Bob McDermant decided to publish his first book, The Ambo, where he goes through some of his memories during the 36 years of service to the QAS (Queensland Ambulance Service).

On the inside cover, the book’s slogan reads, “it’s never too late,” an acutely relevant sentiment for Mr McDermant and a message heavy with inspiration for all.

The novel is a document of his many years spent with QAS and is a story he admits is a relief to finally have out in the world.

He says, “I think it’s a relief because it shows that if you really want to do something, even if it takes you your whole life, if you accomplish it at the end, that’s the big thing.”

The story follows his largely successful journey to improve the service alongside his fellow ambulance officer Arthur Deoberitz.

Lack of training, old equipment and out-of-date procedures. This is what Mr McDermant was faced with when he joined the Queensland Ambulance Transport Brigade in 1947.

He says one of the largest issues he faced were these outdated procedures as they had been based on a manual that hadn’t been updated for 50 years.

Both himself and Mr Deoberitz were able to introduce a training program to bring treatment in line with modern medicine and the pair began to turn the QAS around.

These changes helped to lay the foundations for the progressive and highly-skilled paramedic service of today.

“Once you lose history you can never get it back so to capture this is just so great. A lot of people think that the Ambulance Services was always like it is today, but in the book you see the struggles that Bob went through to put the foundation stones in place for us to have the great ambulance service that we have today,” he said.

Mr McDermant echoes these sentiments, saying “we’ve got an Ambulance Service that is probably the best in the world.”

Looking back over the years he says, “…I’ve made so many, many friends. It’s absolutely amazing and wonderful, and it’s been worth every bit of effort that has been put into it.”

His effort has definitely paid off with a crowd of 50 people joining Mr McDermant in support of the author for the book launch.

Family, friends, fellow residents of Seasons Caloundra, where the author now lives, and even Mr Bowles attended the event for the author’s debut.

His son, Mr Greg McDermant, puts their support into words saying, “I’m incredibly proud of him for having nutted his way through this book”.

He says he is proud of his father’s achievement and it is proof that it is never too late to achieve a dream.

If there is anything to take away from Mr McDermant’s example, it is this message; “it’s never too late.”