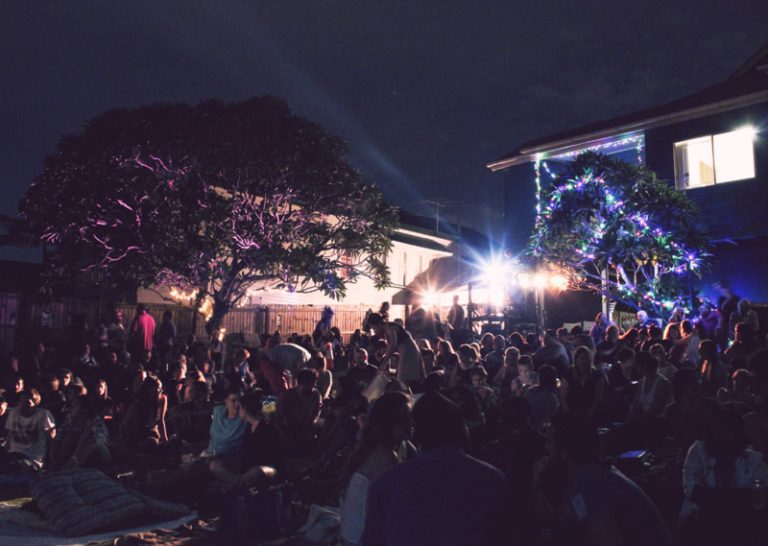 Film lovers are in for a treat, with the Brisbane Backyard Film Festival returning to West End this weekend.

Showing Friday 4th and Saturday 5th December, the event is an annual celebration of local films and their makers in a relaxed setting.

Families can enjoy food trucks, picnics, and movies under the stars, created by some of the best film talents the city has to offer.

Brisbane Backyard Film Festival organiser Matt Smith said this year’s performance is going ahead because of the eased COVID-19 restrictions.

“We were tossing up between having an online event, which obviously removes a lot of the appeal of how Backyard Film Festival works, because it’s a community. Then, basically, the restrictions got eased, and that’s when we thought about hosting it in December.”

Mr Smith said audiences could expect to see a variety of short film genres, music videos and trailers, all made by local artists.

“This year, we’ve got a nice mix of some comedy, some sci-fi, and some docos. Comedies are always the popular ones, because Queensland, or Australia in general, have a good fondness for comedy. They’re all really good short films.

“We’ve got about 12 this year, and most of them go for 5-10 minutes. So for the same time as a big blockbuster film, you can watch 12 short films and help support local filmmakers and creatives to get their content seen.”

“A lot of the short films have been made by people who’ve had content in the Backyard Film Festival previously. So we’ve got Short Stack and Higher Goon, and then there are a few university graduates as well.

“It’s probably the first time that a lot of these films have been seen on a big screen, so it’s good to give people in the industry a voice and an outlet to get shown, get seen.”

Local filmmaker Jamie Landsbeig, whose film Rebel with a Cause will be featured at the festival, said this is an excellent opportunity for emerging filmmakers.

“So Rebel with a Cause is about Sasha, who was very involved in the extinction rebellion last year and how she came to be there. She was just a regular person, and then she kind of got more and more involved to become a full-time activist. I’s my first film of my own I’ll be seeing in a festival, so that’ll be great.”

Ms Landsbeig said she is inspired by local and social justice issues in her filmmaking.

“I’m really inspired by social justice, and so I try and learn about the issue and get to know the people involved and people that have the reason to tell their own story.”

Gilberto Roque, another local filmmaker whose work will also be featured, said he appreciates the film community in Brisbane. He is behind the documentary Faces of West End, in which a 72-year-old man from Honduras living in the suburb shares his beliefs, motivation in life and connections with the area.

“It’ll be great to share my film with the community. It’s good to be a part of it and to have this opportunity.”

Mr Roque said he is looking forward to the festival in West End this weekend.

“It feels great to have my film out. I’m really looking forward to seeing other’s films and meeting more people in the film community.”

Filmmakers interested in having their films shown at next year’s festival can apply online. Mr Smith said the process is easy.

“So there’s an online portal called Film Freeway, where people submit short films, trailers and music videos. That’s closed back in February for this year, but we’re looking at reopening again early next year and hosting it again in 2021.”

Mr Smith said the West End Croquet Club is the perfect venue for their festival.

“The West End Croquet Club has plenty of space; there’s mingling, and food trucks and vans. It’s a relaxed atmosphere, which is what we’ve been known for the last eight years.”

Tickets are available through Event Brite. Head to the West End Croquet Club, from 5-10 pm on Friday 4th and Saturday 5th December for short films by our local artists.