False “council letter” is being mailed to Brisbane residents 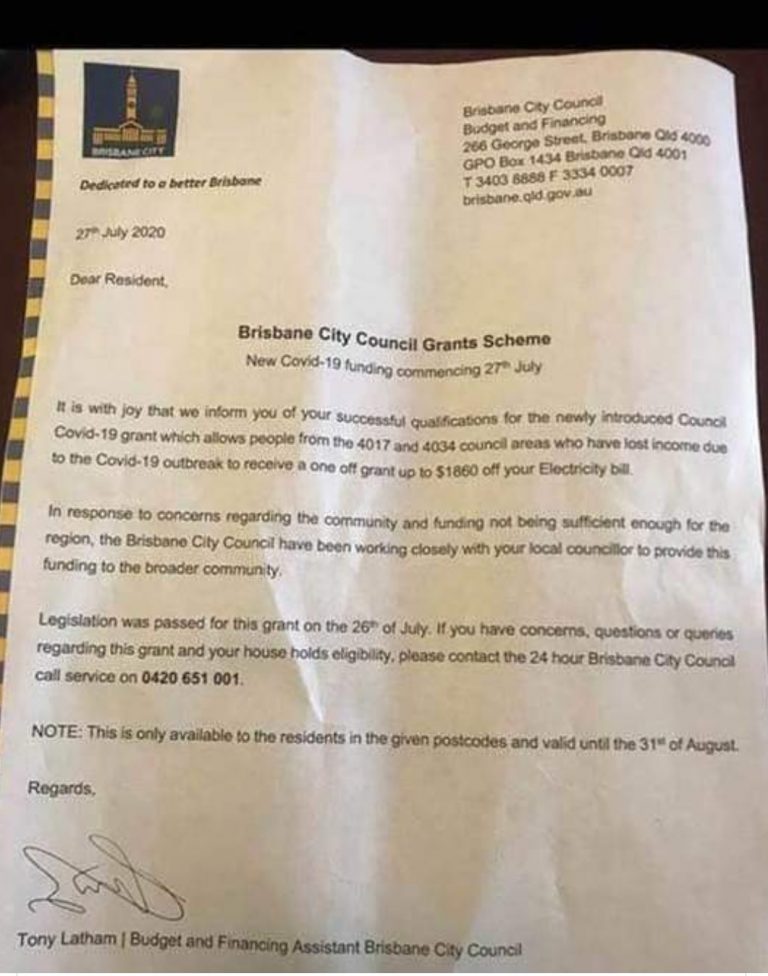 Councillors are urging Brisbane residents to be alert and mindful of a current scam targeting the elderly in multiple areas.

The city administration has received notification of a letter, appearing to be from Brisbane City Council, that is being delivered to elderly residents in the Bracken Ridge, Aspley, Boondall and Carseldine areas.

The letter states the occupant has been successful in obtaining a newly introduced COVID-19 electricity rebate.

Councillor Angela Owen, from the Calamvale Ward, was the first one to come across the letter. Since the beginning of this month, she has been warning residents about the scam.

“Brisbane City Council does not offer grants or rebates for electricity bills nor would you be directed to a mobile number for 24-hour contact,” says Ms Owen.

The scam offers residents who have lost income due to the pandemic and that are in the postcode area from 4017 to 4034, a rebate of up to $1800, off their electricity bill.

“There may be other versions circulating for other postcodes,” Councillor Steven Huang, from the MacGregor Ward said.

The letter is printed with the Brisbane City Council logo and address details, however, the mobile number included in the letter is not a number attached to the council.

The script continues to be convincing by stating that Brisbane City Council has been working with the local councillor to provide COVID-19 funding for the broader community.

The scam alerts residents that they must act quickly as the offer expires on the 31 st of August.

The councillors are now asking that as many people as possible share the scam information on Facebook.

Council urges residents to not call the mobile number and to contact them immediately on 3403 888 if they receive the fake letter.