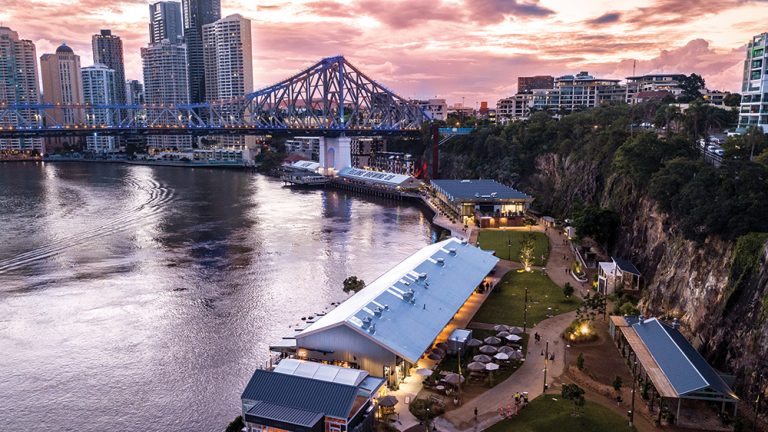 Howard Street Wharves is nestled at the Brisbane river’s bend, beneath the Story Bridge and the sheer face of riverside cliffs. It is a 3.4-hectare site that has now been transformed into an agenda-setting entertainment and lifestyle precinct surrounding heritage listed buildings.

Tourism Minister Stirling Hinchliffe said that the new pontoon would link Howard Smith Wharves under the Story Bridge with direct access to the Brisbane River for commercial tour operators for the first time in decades private vessels up to 24-metres.

The pontoon is already in use with ‘River to Bay’, adding Howard Smith Wharves to its day and night guided brewery tours along the Brisbane River.

The Tourism Minister states that they are expecting the River Terminal Project to hit its full potential once the Federal Government is able to reopen the international border.

“Up to 360,000 visitors every year are predicted to use the River Terminal Project, supporting local jobs and contributing $13 million to Brisbane’s economic recovery, which is already underway,” says Mr Hinchliffe.

Member for McConnel Grace Grace said the River Terminal Project was a feather in the cap for Brisbane tourism.

“Howard Smith Wharves has been a game-changer for Brisbane, and this new pontoon will make it an even better experience for the public,” Ms Grace said.

“Two boats are already in the water with the other pair expected to be ready in coming weeks,” he said.

Howard Smith Wharves chief executive Luke Fraser said there had never been a more critical time to invest in tourism.

“Now is the time to create new tourism product and jobs,” Mr Fraser said.
River to Bay co-founder John Sharpe said the river was a great way to explore the city.

“Locals are loving Brisbane River Brewery Tours and are excited to bring back our ‘best of Moreton Bay Adventure’ and high-speed experience to Saint Helena, Dunwich, North Stradbroke (Minjerribah) and the Tangalooma Wrecks at Moreton Island (Mulgulpin),” says Mr Sharpe.

The Howard Street Wharves is a modern waterside development with restaurants, breweries and a sleek, contemporary hotel. You can find more information about the location at the website www.howardsmithwharves.com.