Jennie Heaton and her piano: a sharp combination 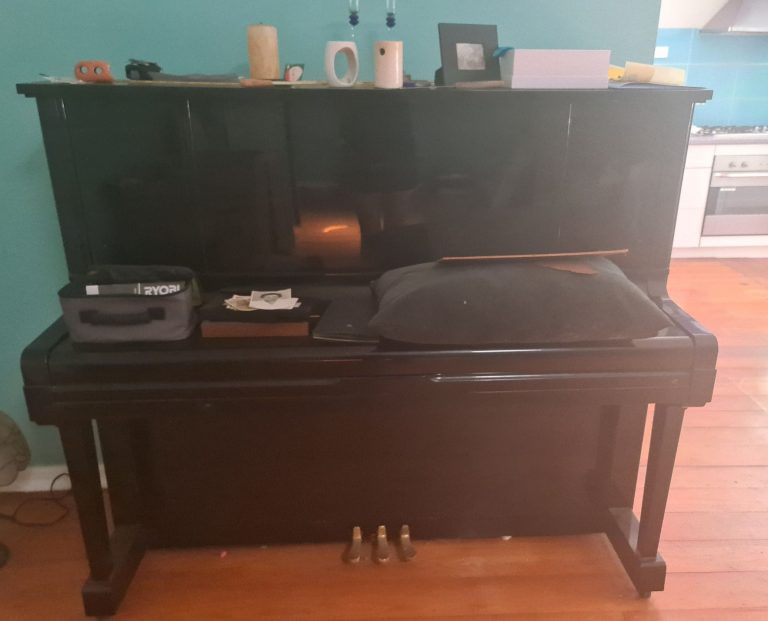 Jennie Heaton and her piano formed a unique combination. One might even say they were perfect companions following each other’s leads choreographically, a partnership that could be explained exclusively through the world of music. They understood each other.

A stroke 14 years ago led the piano and singing teacher to make a forced and undesirable exit from the art scene.

From there on, the Kawai Piano – that accompanied Ms Heaton since her departure from New Zealand to Australia – has been sitting around her daughter’s house.

The item has become a piece of furniture, not the imposing musical instrument that used to be the extension of Kirsten Corin mothers’ body.

“I have stored that piano in my house, but I’m moving now, and I don’t have room for it. I thought this is a real problem,” Ms Corin said.

“I could sell the piano, of course. But I think the idea of a family making use of it to grow their children’s skills and perhaps another person coming out of this arrangement with a piano being an extension of their body would sit really well with my mother.”

On a Facebook community group, Ms Corin exposed her situation and offered a ‘lend’ arrangement. She would lend the piano for as long as the interested party needed it. All costs would be covered.

“My mum lost so much of her life because of her stroke. And the piano was the last piece of life she was clinging on. It’s a heavy part of her past once she’s been in a nursing home for 14 years.”

After a few days, Ms Corin calls for “a new and temporary house” for the piano had been met. An entertainer in her 40s has shown interest in renting the instrument.

“She [entertainer] said she had a dream, just the night before the publication of my post on Facebook. She was playing the piano in her own house. It was a sign,” Ms Corin said.

Without success, SolutionWire has been attempting to contact the person who has borrowed the piano. We will keep trying since it is our duty to make sure Jennie Heaton’s musical legacy is being preserved.