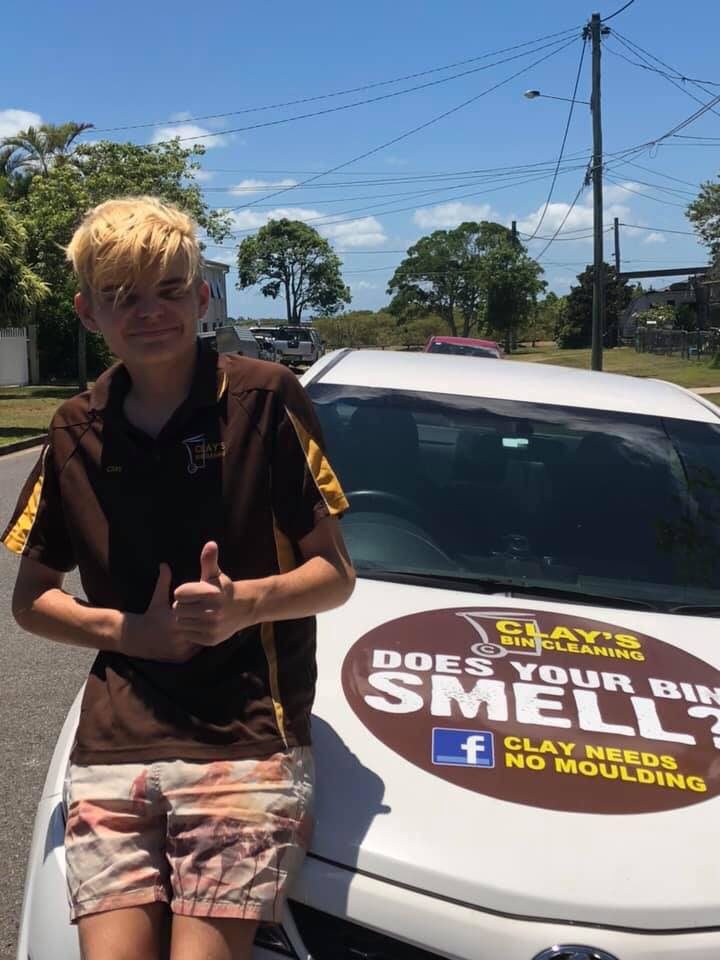 It was just two years ago when a 17-year-old teenager was struggling to find employment. Today, Clay Lewis, who has autism, is the owner of his own bin cleaning business, which employs three local kids.

In spite of alarming 2015 Australian Bureau of Statistics data, showing the unemployment rate for people with Autism is three times greater than those with a disability, Lewis overcame challenges to forge his path as a successful entrepreneur.

When doors don’t open, build your own

AFTER struggling to find a traditional route to employment, Clay knew he had to take an unconventional approach. “I used to work in a hot chips store, but they didn’t want me,” Mr Lewis said.

Clay’s mother, Laura Lewis, supported his endeavor from the beginning as she saw potential in her son. “Clay has always had dreams that a disability pension will not support.”

“Dave Hughes posted on Twitter that a kid had letterbox dropped in his area and they were offering a service taking the bins out and then bringing them back in after they’ve been emptied,” Ms Lewis said.

Inspired by the idea, Clay offered to take out bins in his neighbourhood. This gave him the chance to familiarize himself with the work environment before opening his enterprise. His business was launched last year with the promise of a free bin clean as a Christmas present for clients.

Ms Lewis said Clay’s first weeks in the job were spent developing practical skills. “His dad, Warren, trained him on cleaning bins until he was capable. Then we started advertising in our local area, initially with friends and family,” she said.

After 22 months in business, Ms Lewis said her son’s business was already giving back to the community. “Clay cleans bins locally, he hires locally, and then he spends his money locally, so that it’s a really great community cycle,” she said.

A day in the life of Clay

Juggling a profitable business with all the commitments involving the year 12 in school is not an easy feat. For almost two years, Clay said his life has been a whirlwind.

“On Mondays, I get really tired. I don’t sleep well on Sundays as well,” he said. “I enjoy how the job gets me money and I get to see pets at my customer’s houses.”

Ms Lewis attributed a lot of Clay’s success to the school helping him manage his busy schedule. “He has got a homework club that he can attend at school which alleviates the pressure of the work he has to do at home,” she said. “This is a great service that the school offers.”

Maggots, feces and putrid garbage are just a few of the nasty surprises Clay has encountered on the job.

Clay said he quickly learned that the “cute little white worms” that crawl around in bins were not so delightful. “Mum told me they are not cute…they’re maggots,” he said. “Now they are one of the most disgusting things I find when cleaning bins.”

Clay’s customer base of 90 clients have embraced his work ethic and treated him with respect and kindness.

Ms Lewis said Clay has served the Redlands community well and was working towards securing 200 regular clients. “His customers are amazing, understanding and very kind,” she said. “They are curious, and we encourage people to ask questions so that we can give them the right information and advocate about what autism means and what it looks like.”

Moving forward, the future looks bright for Clay, who is set on achieving several life goals. “I want to live on the Gold Coast, and have a wife. I also want to become a pro sim-racer.”

NextBrisbane’s oldest house will get $5.8 millionNext