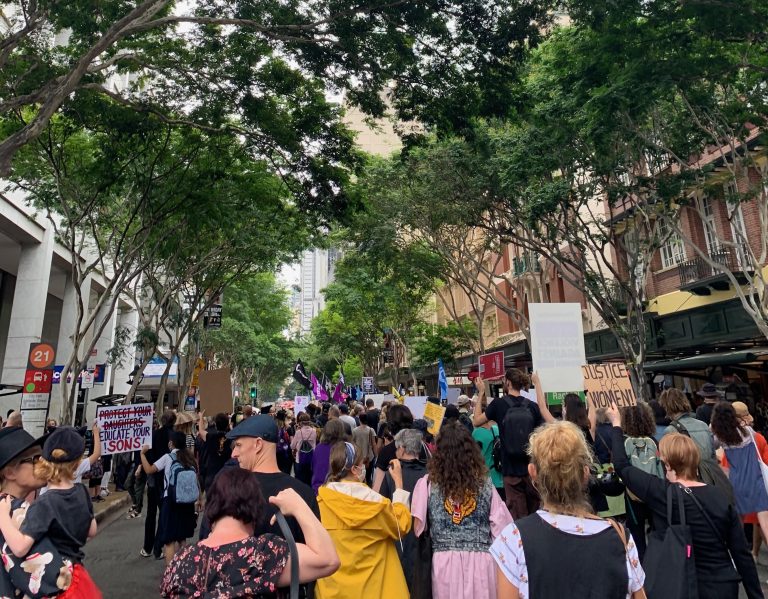 Protesters across Australia rallied for parliamentary action on gendered violence and inequality amid a national reckoning on women’s treatment in politics, schools and the workplace.

As parliamentary sittings resumed today, tens of thousands of protesters in 40 locations participated in the March 4 Justice rallies, with the central protest occurring outside of Parliament House in Canberra.

March 4 Justice Brisbane co-organiser and speaker Kathryn Fry said the movement was triggered by the government’s handling of former staffer Brittany Higgins’ allegations that she was raped by a male colleague in Defence Minister Linda Reynolds’ office in 2019.

“Australian women have had enough. It has been like that for a very long time, but I think that was a final catalyst for women to go: if people are not protected at the highest level, then we are just all not protected.”

Prime Minister Scott Morrison has maintained that his office only learned of Ms Higgins’ allegation a few days before they became public last month. At the same time, text messages obtained by the ABC suggest the Prime Minister’s Office was aware of the alleged incident just weeks after it occurred.

Ms Higgins, who was a speaker at protests in Canberra, told crowds she needed to speak “out of necessity” and criticised both parties for “avoiding the public and side-stepping accountability”.

The protests were also fuelled by allegations that Attorney-General Christian Porter raped a 16-year-old-girl while at a debating competition at Sydney University in 1988 – and disturbing reports of sexual violence in elite private schools.

Ms Fry said it was “frightening” for women to observe Mr Morrison reject calls for an independent inquiry into Mr Porter. The PM emphasised that an investigation would be contrary to the “rule of law” given that NSW Police closed their investigation into the matter last year due to a lack of admissible evidence.

The allegations against Mr Porter were a vital issue at the Brisbane march, with protestors repeatedly shouting “Porter must go” as they moved through the CBD.

One Brisbane protestor, university student Tara Bennett, admitted that she was “frustrated” at the government’s handling of recent events but said she hoped the protests would force parliamentarians to confront their “internalised and externalised” gender biases.

In a petition delivered to Parliament House today, March 4 Justice demanded independent investigations into gendered violence in parliament and the implementation of the 55 recommendations made by the Australian Human Rights Commission’s 2020 report on workplace sexual harassment.

The petition, which has more than 22,000 signatures, also called for the enactment of new gender equality legislation and mandatory gender violence and sexual harassment training for Federal MP’s and their staff.

A related petition with more than 94,000 signatories sought Mr Porter’s suspension pending an inquiry into his suitability to serve as a minister. He has denied the allegations and is currently on mental health leave.

In a display of bipartisan support, both Queensland Premier Annastacia Palaszczuk and her cabinet, as well as Opposition Leader David Crisafulli, met with protesters at the culmination of the march outside State Parliament this afternoon.

While in Canberra, Mr Morrison was criticised by the Opposition after he offered a private meeting with local organisers—which they rejected this morning—but said he would not be attending the protests personally.